A few examples of paintings and sculptures made by students (both old and young) in various classes
taught in recent years by Kathy Cunningham.

The first two photos show panels made by senior citizens in 2004-2005,
which are now on display in the lobby of their retirement home in Chicago.
They were designed and painted by about 20 of the residents
over a two-month period, and are seven feet tall. 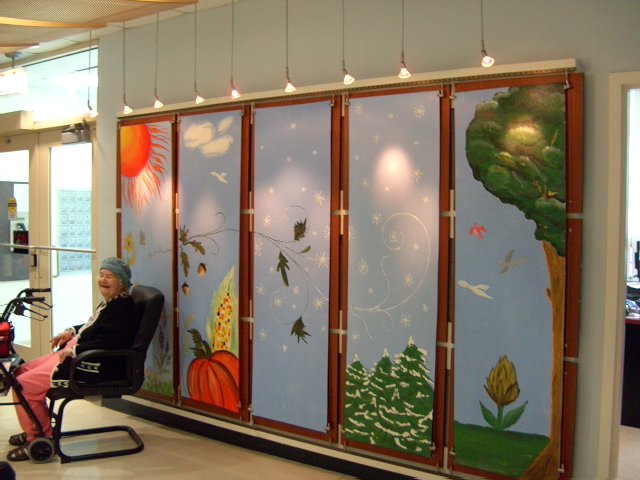 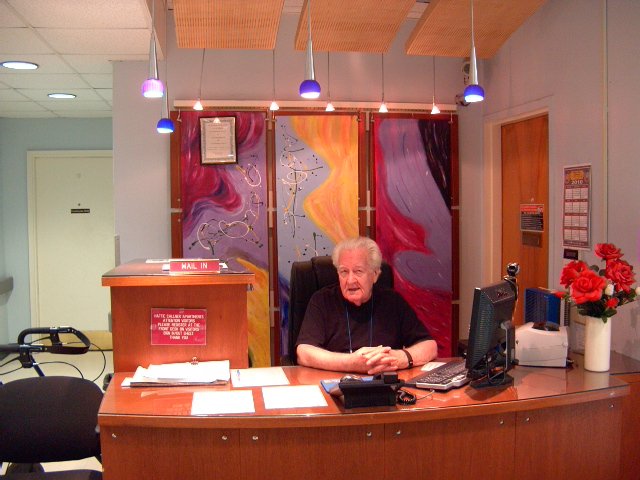 Another resident wanted to create a memento from her trip to see Old Faithful,
so she painted this ceramic plate using one of her photos as a guide.
She used thick, textured paint to create the rocks around the rim. 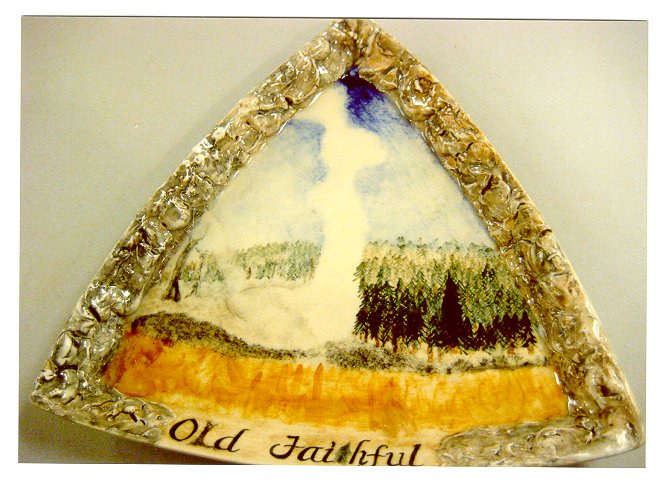 In 2018, another retirement center undertook a different mural-project,
and the results are shown HERE.

The next photos feature pieces by children ages 3-12 who
took classes with Kathy at the Evanston Art Center.

The clay animal masks in the center of the next photo were
made by students in Kathy's class in the summer of 2010. 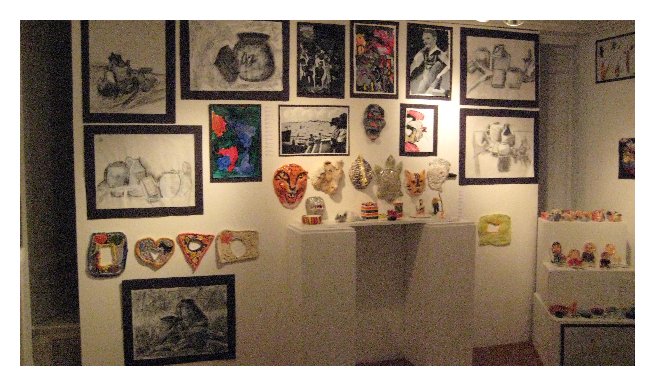 In the summer of 2006, there were five week-long camps
that created work around the theme of the Silk Road.
Each week highlighted a country along that route.
The theme was inspired by the Silk Road Project of
Yo-Yo Ma and the Chicago Symphony Orchestra.

In the following publicity release, the top photo (the entry to the exhibit),
the middle-left and lower-right photos feature pieces by students
who participated in Kathy's classes that summer. 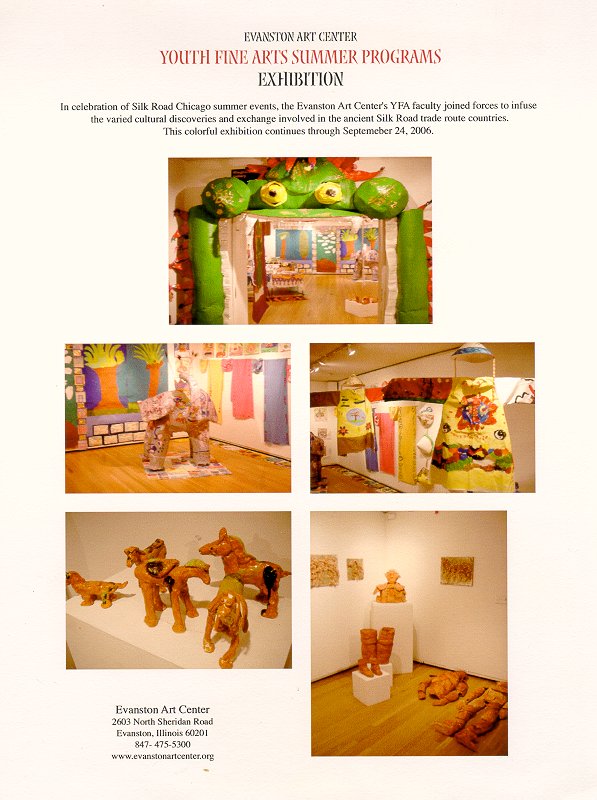 Here is a larger image of the gaping gateway,
followed by three other larger photos.
The dragon’s mouth was made out of papier maché. 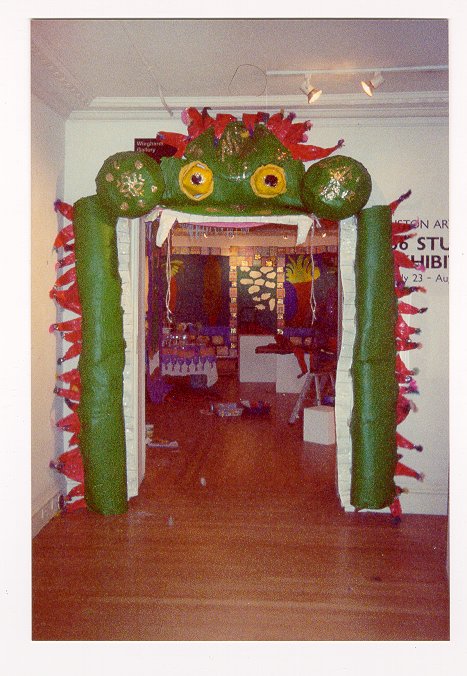 The rectangular panels at the bottom were clay relief
panels of griffins inspired by Persian art. 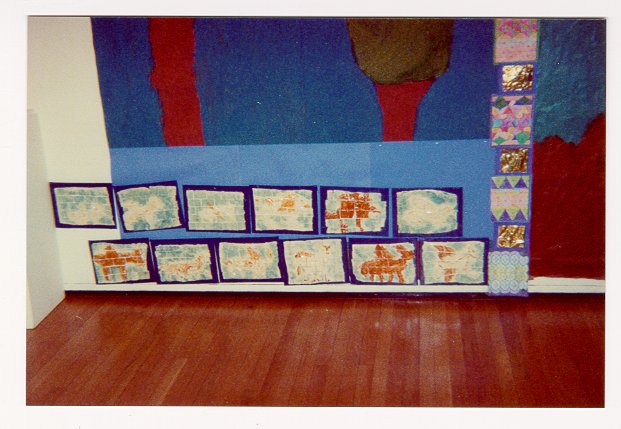 Many shards of broken ceramics were made into mosaics
on boards covered with sand to simulate a “dig.”

The clay figures in front of the window represent
the half-boy half-elephant God Ganesha
from the Hindu culture. 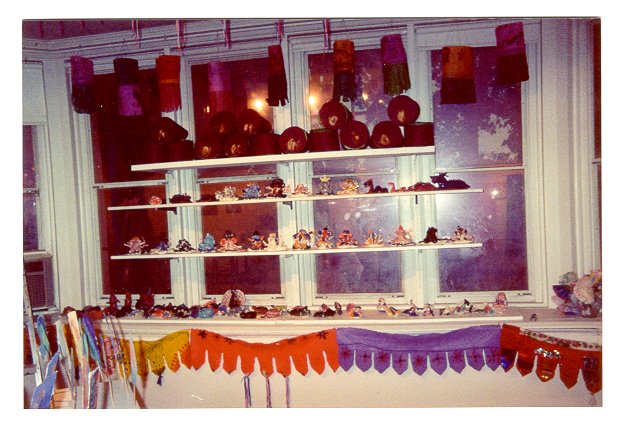 Next is a large papier maché turtle from the summer of 2004.
He measured eleven feet from his nose to his tail!
This was the first exhibit by children to be shown in the
Main Galleries of the Evanston Art Center.
Each of the five camps worked with myths from different countries.
The turtle with the world on its back comes from a
Native American myth about how the world was created. 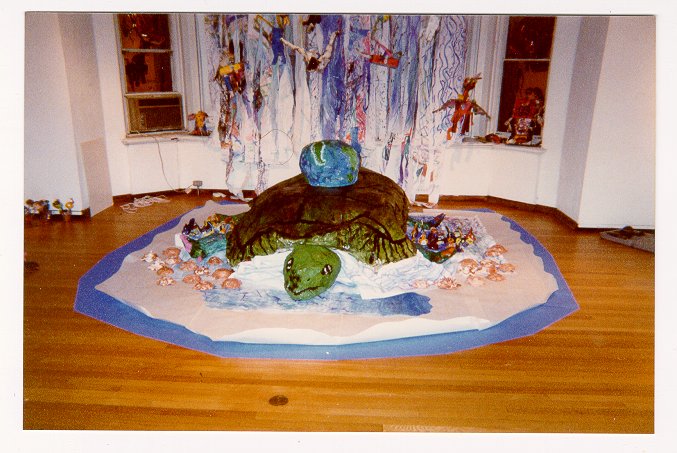 The next four photos present clay mosaic thrones which were part of the 2008 project in which students from all five camps collaborated in the design and construction.
The theme for the summer was Fairy Tales. 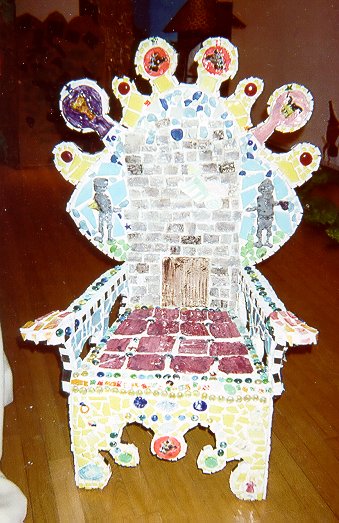 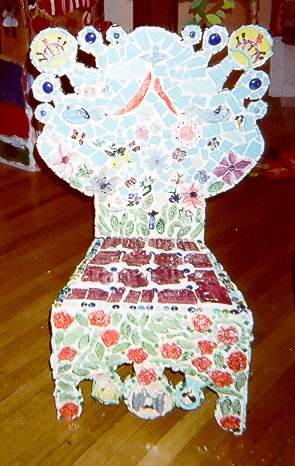 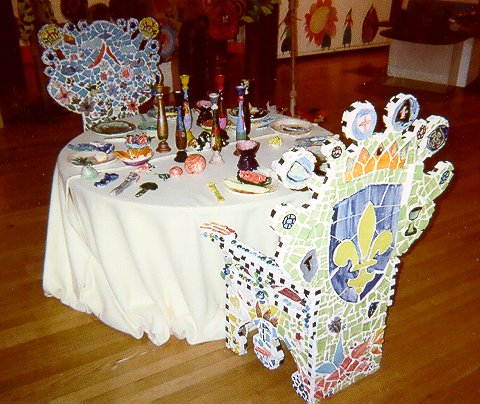 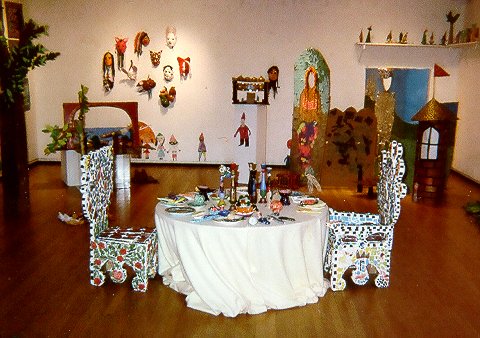 The next image is from a one-week camp on portraits.
Students created not just the likeness, but included
qualities of the interests and personality
of the children they were depicting. 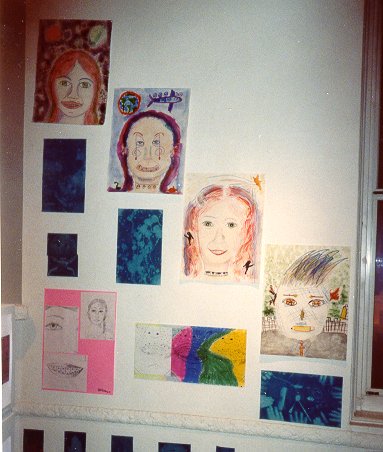 In a summer clay class, the children made lighthouses
inspired by the ones in the center.

This is an under-the-sea scene created by 3 and 4 year olds
which was exhibited at the main public library in Evanston.
It is watercolor on paper, and the fish were made 3-D. 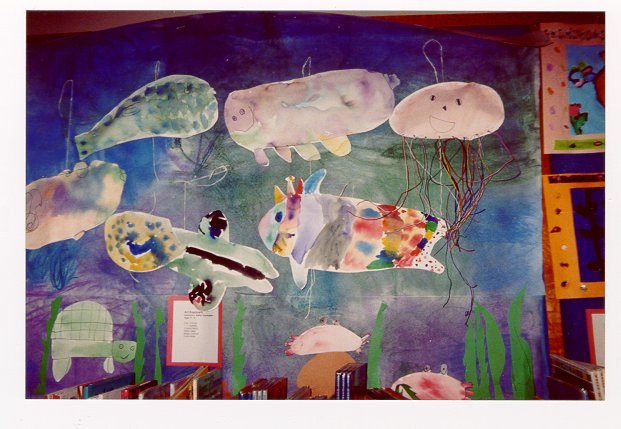 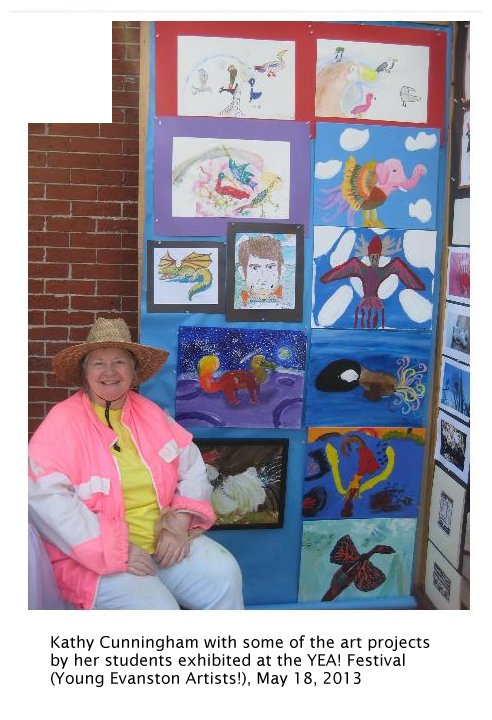 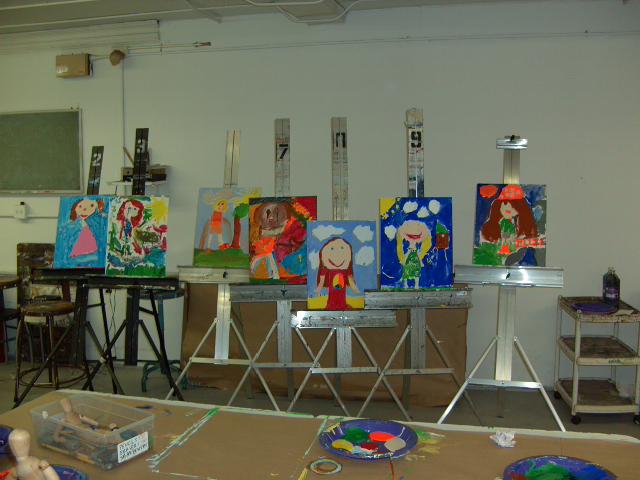 Besides activities at their home base, the Evanston Art Center
has also co-ordinated classes and group projects elsewhere
in the city.  The following photos show examples where
Kathy Cunningham has been the teacher.

Next is a collaborative paper mosaic made in 2008
at the King Lab Elementary School in Evanston
in the after school program called Artreach. 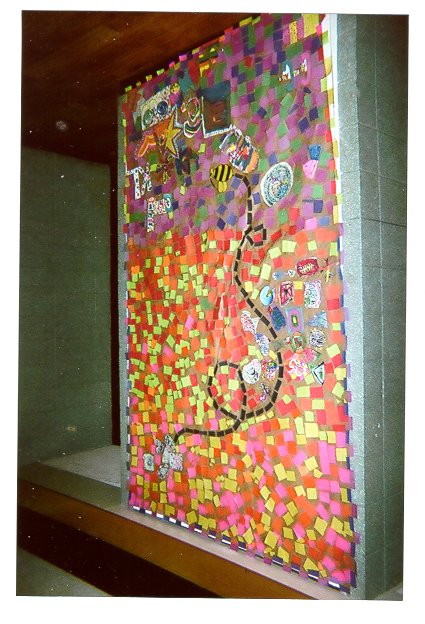 The final photo is a wood panel 4 feet by 4 feet painted with acrylic.
Twenty-two children in grades K-5 contributed to the design and creation of this
piece which was also part of the Artreach program at King Lab Elementary.
It was displayed in downtown Evanston during the summer of 2006
as part of a new construction site. 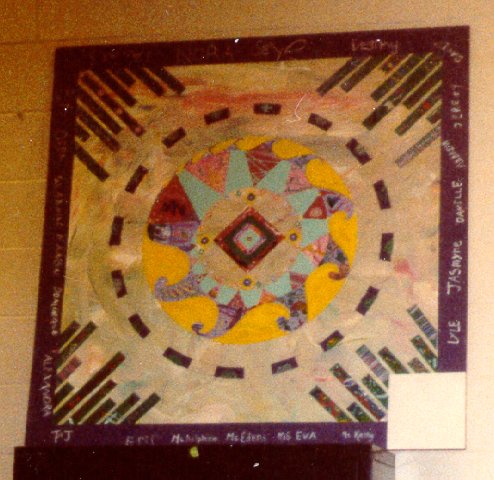 As the Chair of the American Heritage Committee of the Chicago Chapter of the DAR, Kathy was asked to take charge of their main public project - decorating the USA Tree in the annual exhibit at the
Museum of Science and Industry called
Christmas Around the World.

Featuring trees from about 55 different countries,
the USA Tree is always a focal point.

In 2011, the 75th anniversary of the exhibit was marked
by a tree bearing ornaments representing all 50 states
and the District of Columbia.  Each ornament was
hand-made by a different chapter member, and
was dedicated to a military hero from conflicts
that pre-dated the American Revolution
right up to the Iraq War.

To see this tree and images of each of the 51 ornaments,
click HERE.

The following year (2012) the theme of the USA Tree was
Made in the USA.

All the ornaments were made in America, some by hand
by various members and friends of the DAR in Illinois.

To see that tree, with images of most of the creations,
click HERE.


The Exhibit continues year by year, and Kathy
continues to be in charge of the USA Tree.
Here are some photographs from 2013.


The following year, a different group helped Kathy,
and were dubbed the Friends of the USA Tree.
Here are photographs of those succeeding years...